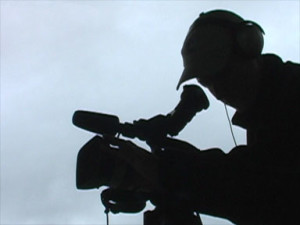 Put me on stage speaking in front of a crowd of 2,000+ people: No problem.

Put me in front of a video camera by myself: I turn into a blithering idiot.

So yeah, I know how it feels.

Video is not easy (well, maybe for some); for most of us, not so much.

Recently, a former client contacted me and said that she had her first video interview and it turned into a disaster.

To use her direct quote: “What a train wreck. I hope they get a very big bowl of non-virtual popcorn before they watch it, because they are going to be more entertained than the latest Adam Sandler movie.”

I am guessing that she is not alone in feeling this way about video interviews.

Because most of us don’t appear in front of video cameras on a regular basis, having this unfamiliar perspective can throw you off your job interview game.

Sort of like the Buggles’ song, “Video Killed the Radio Star,” you might be the best candidate star, but if you can’t carry it through video, your job prospects might be killed right then and there.

So let’s talk about getting prepared and literally setting the stage for a successful video interview.

Any good actor knows the value in rehearsing. It’s a way to train your mind to get into the role.

To perform your best, you need to get familiar with the material, and that means rehearsing your script.

Don’t have one? No worries.

Let’s break down the rehearsal script for a video interview:

Too many times, people rely on the lighting coming from their computer screen, and what happens is that in a video interview, they look positively ghostly (and ghastly) to the viewer.  Work on bringing in some soft lights that don’t glare and warm up the scene.

Get the camera angle right so that you aren’t providing a surgeon’s view of your nostrils to the interviewers.  Above your head with some head room is great, and make sure your shoulders are visible to provide some balanced framing.

Important note for preparing for a video interview: set up your camera / microphone, and make sure all software is updated / camera functions are operating at least an hour before the scheduled interview time. If you do run into problems, you’ll at least have some time to troubleshoot.

It might be a good idea to talk to the interviewer before the heavy questions start to determine what the plan might be in case technology breaks down. I.e.: “As much as we all love the Internet, what would be a good telephone number to reach you in case this connection gets lost?” Disaster averted.

Another thing: if you find yourself getting distracted by looking at yourself on camera (some programs like Skype provide 2 screens- one of you and one on the interviewer’s side, the minimize the window with your feed.

If you know your material, have a comfortable / familiar place in which to interview, and have made sure all of the technology is working, the rest of the video interview is all about you in action, which would be like any other interview.

The moral of the story: Don’t let a video interview kill your candidate star.  You’ve got this. It’s really a matter of being more prepared than an in-person interview.